The Thursday Lecture - The Proposal, Part One

The difference between a pitch and the next stage of the development process—a proposal—is story. A proposal must demonstrate that your pitch has “legs” by providing a more specific outline of events, additional background on the characters, and some sample plots.

As with most every document in comics, there is no “right” way to format a proposal, but I’ve found through years of experience that this is what works best for me:

Lead with the high concept, a brief but dynamic one- or two-sentence description of the idea—

—follow that with a little more detail on the bigger picture, clarifying the who, what, where, when, how and why of it all—

—next, give brief bios of the main characters—no more than a short paragraph for each, but enough about them so that whoever’s reading your proposal can have a good handle on them by the time they get to—

—the outline, a more detailed version of “the bigger picture” that walks us gradually through the series an issue or two at a time. Provided it’s interesting to read, feel free to devote about a page to synopsizing issue one, a half-page or so to issue two, and gradually less detail for the next handful of installments. At this point, you’re still in the proposal stage, so you’re walking the fine line between showing you have confidence in your ideas and revealing that you’re so in love with them that you have every page of your opus worked out nine years in advance, which frightens every editor ever. If, as you’re writing your proposal, you’re not sure of the difference, imagine buying a car. Imagine buying it from a confident, knowledgeable salesman who demonstrates its most attractive features and then lets the merchandise do the talking. Then imagine buying it from a salesman who won’t let you leave the showroom until he explains in excruciating detail exactly how the high-performance fuel injection system interfaces with the 1.6L 4cyl VTEC-E engine and insists on giving you the 82-year history of the factory that tooled the camshaft. My point is, don’t overwhelm.

Then end your document with a fitting summary/conclusion.

To give you a more concrete example of what works, here’s my proposal—broken up over two posts—for a series I did a few years ago for Top Cow called HUNTER-KILLER (and which I’m relaunching this summer as a HUNTER-KILLER VS. CYBERFORCE mini with artist Kenneth Rocafort). Yes, technically, at this point, I wasn’t “selling” anything—since the very basic concept came from Marc Silvestri, the publisher (and artist), the book was already green-lit, and I probably didn’t have to go into this much detail—but simply for my own peace of mind, I chose not to break format. Having to write a formal proposal would, I knew, push me to think through every aspect of the series.

THE HIGH CONCEPT: Genetically engineered beings hunt rogue agents from their own secret program, desperately scrambling to keep these “Ultra-Sapiens” from becoming Weapons of Mass Destruction in the hands of the world’s superpowers, power brokers, and madmen. 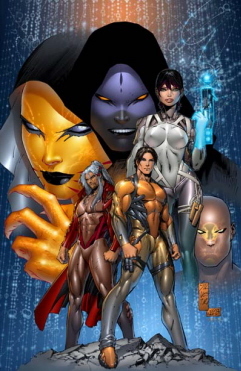 THE BIGGER PICTURE: What ordinary citizens don’t know is that the Cold War wasn’t fought over nuclear détente. It was clandestinely fought over the Ultra-Sapiens race, a eugenically created strain of covert super-beings with various powers and abilities—some fairly mundane, some earth-shattering. In 1962, when the public thought ballistic missiles had been planted in the jungles of Cuba, the small communist country had in fact become the assembly point for an army of Russian Ultra-Sapiens. JFK was not weighing the consequences of nuclear retaliation as history has taught us, but of super-human retaliation. So fearful were the world’s super powers the existence of their Frankenstein’s monsters would become known, even the perceived threat of nuclear annihilation was preferable to the truth.

During the height of the Cold War, Russian and U.S. diplomats were not only tracking nuclear missiles but Ultra-Sapiens. Like some perverse real-life version of Pokemon, these altered humans were being counted and measured by their power, and secret treaties were struck in order to achieve a constant state of détente. If America had one who, for instance, could wipe out a small town with the poison in his sweat glands, Red China was allowed two that could become invisible.

In between the end of the Cold War and now, however, the vast majority of Ultra-Sapiens banded together and revolted against years of being treated as military property. After wiping out the agencies which tracked them and most records of their own existence, some retired, some went into hiding, and some put themselves on the open market.

Now a new organization, the HUNTER-KILLERS, has been gathered to once and for all find—and decide the fates of—these rogue super-beings. Some are harmless, some are evil, but all of them must be accounted for. Moreover, those who are deemed to be a threat to the public safety, regardless of their moral leanings, must be “accounted for” with extreme prejudice.

A few Ultra-Sapiens have been assimilated into the Hunter-Killer organization, using their special abilities to help enforce its agenda and/or cloak its presence. Most field missions, in fact, are led by a female U-S named Samantha Argent (more on whom below).

The Ultra-Sapiens are each powered by and marked with a latticework of bioengineering visible just under the skin—”tattoos” in shapes and locations on the body that suggest their powers (near the eyes for vision powers, on the skull for mental powers, etc.).

THE CHARACTERS:
ELLIS (age 22) is our POV character, a second-generation Ultra-Sapien who has only recently learned of his power, which was kept from him by his parents until their death. Ellis can mirror/mimic the powers of other nearby Ultra-Sapiens, making him a perfect “dowsing rod” for the Hunter-Killers as they track rogues—the closer Ellis gets to them, the stronger the mirroring effect.

A man of action, Ellis is also very contemplative, an armchair philosopher who’s always looking for a greater meaning in the agency’s overall agenda. Ellis deals with regularly making hard life-and-death decisions by immersing himself in the writings of Empericus, Baier and other moralists and ethicists in his off-hours.

And when we say life-and-death decisions, we mean it. Every adventure should hinge on a completely unpredictable climax. Even the missions that seem like milk runs end up throwing some sort of surprising “can’t/must” dilemma in our boys’ laps, and we Ellis’s decisions will always be surprising. The harder and more unpredictable the choices he’s faced with, the richer and more interesting a hero he’ll be.

WOLF (age indeterminate—mid-thirties, at least) is the buddy in this buddy book, an Ultra-Sapien who sometimes works for Ellis’s agency and sometimes works solo. As his name suggests, he’s our tough guy, a super-assassin with great strength, speed, and reflexes. His is the most extensive “tattoo”—a full-body overlay that allows him to fade into near-invisibility.

SAMANTHA ARGENT (mid-twenties) is the coordinator of the Hunter-Killer project and often a field agent vying with headstrong Ellis for control of the missions. Samantha, also an Ultra-Sapien, has a tattoo and/or special clothing that allows her to manipulate the electromagnetic energy coursing though her veins and coalesce that energy into ammunition for her unique armaments. Samantha, in contrast to most action-heroines, actually has a warmth and a sense of humor to her; she’s tough and in charge, but she’s by no definition a bitch. She’s enough at ease with herself to successfully maintain a non-emotional but fu
rniture-breaking physical relationship with one of the other members of the cast.

MORNINGFROST is the prime villain of our series. The head of the Hunter-Killer project, those under his command have no idea he’s manipulating them based on his own (accurate) visions of the future. Eventually, they will find out about his machinations and turn on him.

******
Breaking this long doc up into two posts; second half to follow next week.

Home The Thursday Lecture - The Proposal, Part One